I’m not usually one to celebrate random holidays. Don’t get me wrong – I’m basically little miss Christmas and I love me some Thanksgiving pumpkin pie. Birthdays are always a huge celebration in my home and I will eat all the chocolate Lindt bunnies at Easter. But specialty holidays like Family Day and these random UK bank holidays aren’t my jam. I mean, what good is a holiday that doesn’t give you an excuse to eat something delicious? Which is part of the reason why I’m sharing this Irish coffee blondies recipe with you

St. Patrick’s Day is kind of a weird holiday for me. I’m technically part Irish – I’m able to live in the UK because my grandfather was born in Wales and his mother was Irish. So while an eighth of me feels as if I’m supposed to partake in this day as a familial obligation, I’ve never really felt a strong desire to celebrate it.

I think the reason I’m not into St. Patrick’s Day so much is that I feel the spirit behind the holiday has been trashed by . What was once a Christian feast day for an enslaved teenager who went on to establish monasteries and schools has now become a global pub crawl.

I’m not overly religious – I was baptised as Catholic but haven’t practiced since I was 17 – but I can get on board with the idea of rising up from misfortune and not letting your past stop you from making something of yourself and doing what you were born to do. I believe this is a mentality worth celebrating. Unfortunately, St. Patrick’s Day has now become a secular holiday of shiny costume jewellery and tinted beer. It gives people an excuse to pretend they’re Irish and drink themselves to the point of passing out.

So instead, I went back to basics and made this Irish coffee blondies recipe to celebrate. Since there aren’t any desserts specific to St. Patrick’s day, I had to get a little creative with what we have. Irish coffee is one of my drinks; it was invented in the small town of Foynes in the west of Ireland in 1942. The traditional way to drink it is with a thick layer of cream on top, which you’re not meant to stir in. you drink the coffee from under the cream and it mixes as you sip.

To emulate this in the blondies recipe, I decided to make a strongly flavoured espresso blondie topped with a fluffy Jameson whiskey infused buttercream. I originally tried to make a topping with whipped cream (for the cream element), but it kept curdling on me after I added the whiskey and just wasn’t meant to be!

The chocolate isn’t traditional either, but I always top my Irish coffees with a dusting of cacao powder or shaved chocolate. Because chocolate + coffee = love.

I like to think my grandfather would give this Irish coffee blondies recipe his stamp of approval. They’re super chewy, taste strongly of coffee, and the Irish whiskey isn’t too overpowering; there’s just enough so you know it’s there.

If you make this Irish coffee blondies recipe, don’t forget to take a photo and tag me on Instagram and use the hashtag #naturallysweetkitchen, so I can share your pictures! It makes my day to see these bakes come to life in your kitchen. 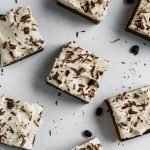 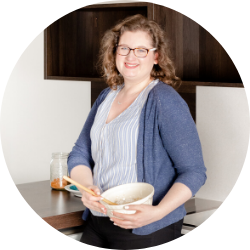 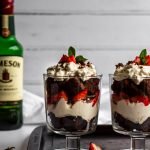 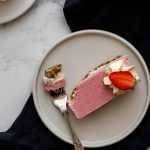 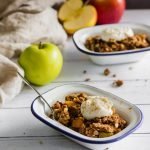 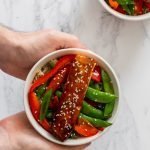 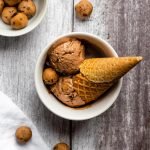